The Splice of Life

A writer commits a comma splice error when she connects two independent clauses without a coordinating conjunction.  Essentially, a comma splice is a run-on sentence.  For example:

The defendant placed his finger on the trigger, he fired the gun at the victim.


At the risk of sounding too big for my britches, as my grandmother would have said, I personally find it difficult to believe educated people commit these errors, but I see them every day.
There are essentially three ways to correct comma splices—join the independent clauses with a coordinating conjunction, make one clause dependent, or separate the clauses into two sentences.*   Don’t let the term “coordinating conjunction” scare you.  It is a fancy name for words we all use in most every sentence we write—and, but, yet, so, or, and nor.


Joining the Clauses
If you choose to join the clauses, you should use one of the 6 coordinating conjunctions listed above preceded by, not followed by, a comma.**

The defendant placed his finger on the trigger, and he fired the gun at the victim.


Making One Clause Dependent
If you choose to make one clause dependent, you simply join the clauses with a comma.


Separating the Clauses
If you choose to separate the clauses, they should be separated into two sentences using a period, an exclamation point,*** or a question mark.

The defendant placed his finger on the trigger.  He fired the gun at the victim.


*Technically, you also can separate them with a semicolon.  I personally don’t recommend this option unless you have an appropriate understanding of the use of semicolons.  It has been my experience that a large number of lawyers (and, perhaps, writers in general) do not.
**As with all grammar rules, this rule is not applicable 100% of the time.  For example, in the following sentence, no comma is needed:
The defendant placed his finger on the trigger and fired the gun at the victim.
Without getting too technical, no comma is required in the sentence above because I’ve re-worded it so that it no longer has two independent clauses and the word “and” merely connects the compound verbs “placed” and “fired.”  The clause “fired the gun” isn’t independent—it can’t stand on its own.
***I personally believe exclamation points should not be used in formal legal writing.
Posted by Megan E. Boyd at 4:26 PM No comments:

A Good Cigar is a Smoke

Several weeks ago, the Illinois Bar Association recommended that Richard Connors be disbarred because of a conviction in 2002 for violating the Trading with the Enemy Act (50 U.S.C. sections 5(b)(1) and 16).  Mr. Connors’ crime? Smuggling Cuban cigars.


From 1996 to 1999, Mr. Connors apparently made no less than 31 trips to Cuba and smuggled thousands of Cuban cigars into the United States via the Mexican and Canadian borders.  This operation apparently was quite lucrative—the cigars were sold in the United States for around $350 per box.

What makes this story worthy of a post on a legal writing blog?  The Seventh Circuit Court of Appeals’ judicial notice of the “cachet” of cigars.  In the court’s 2006 opinion affirming Connors’ conviction, the court, quoting Cigar Aficionado,* observed:


[T]he leaves grown in the fertile soil of the Vuelta Abajo…cultivated and prepared according to centuries-old traditions, produce an incomparably smooth, pungent, and full-bodied smoke.


And, most interestingly, the Seventh Circuit noted it is not only Cuban cigars, but all cigars, that occupy a certain level of prestige in our society, quoting Rudyard Kipling from The Betrothed—“A woman is only a woman, but a good cigar is a Smoke.”


* I haven’t checked, but I suspect this is the single instance in which Cigar Aficionado magazine has been cited as a judicial source.
Posted by Megan E. Boyd at 5:59 PM No comments:

We all use our iPhones entirely too much these days, but the App Store has some interesting offerings for lexophiles.  Below are some of my favorite apps for word nerds:


Vocabology
This cool free app pulls the “word of the day” from several different sources.  You can use the app to impress all your friends by writing a sentence with the new word you learned and posting the sentence to Facebook or Twitter.  Vocabology also has a quiz feature that allows you to test yourself on the words you’ve viewed on the app.


Merriam Webster
As you’d imagine, this app is a dictionary.  It has several other interesting features, though, including voice search, pronunciation, and a word-of-the day.  The $3.99 premium app also features a thesaurus and illustrations.


Grammar Up
This free app features grammar tests and explanations on a variety of topics including prepositions, similar words, pronouns, conjunctions, adjectives, and adverbs.  The tests are designed to simulate the TOEIC English proficiency test.  The full version has 1,800 questions across 20 different grammar categories and allows the user to track speed and proficiency.


Word vs. Word
This game is very addictive and very fun.  You can play by yourself or against others.  The goal is to guess a secret word by process of elimination.  The first player to guess the word correctly wins.  It’s a bit like the game Battleship, but with words.

Thank you for your patience while I was away from blogging on vacation.  I will return to my regular weekly blogging schedule shortly.  In the interim, I want to share with you a little trinket I picked up on my travels. 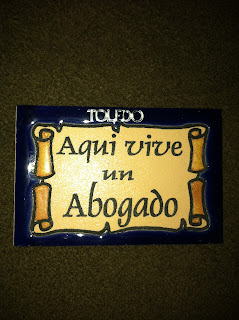