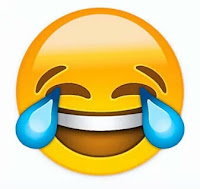 not actually a word. It's the "face with tears of joy" emoji.

The response to this week's announcement has been mixed. Some love the "progressiveness." Others believe Oxford Dictionaries has taken liberties with the word "word" in choosing a symbol.

What do you think? Is OD progressive, or is its choice unbefitting of one of the world's most authoritative English dictionaries?

Happy Friday!
Posted by Megan E. Boyd at 5:22 AM No comments:

Law school exams will be upon us in just a few short weeks. Rather than reinvent the wheel, I'm re-posting this piece from last year showing students how they can use their legal writing skills on doctrinal law school exams.

Exam time is a stressful period, no doubt. Students: study hard. Keep your nerves under control. And use these tips to help you get all that information in your head down on paper. 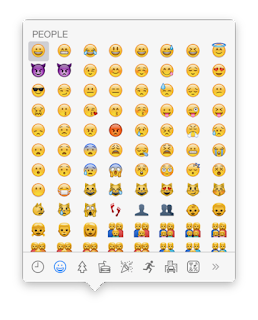 This cool article, published by Slate a couple of weeks ago, outlines the history of emoticons and
emojis and considers several cases in which courts have been asked to interpret the meaning of these little digital characters. According to author Amanda Hess, the first emoticon appeared in 1982, when Carnegie Mellon computer science professor Scott Falhman suggested using :-) to convey jokes and :-( to convey seriousness on his department's online message boards. Since then, emoticons have evolved, to say the least. The Unicode Consortium, which standardizes text characters and emojis, now recognizes 1,281 of these digital symbols.

Hess notes that, in many ways, emoticons and emojis are similar to the non-verbal cues that judges and juries have been asked to interpret for centuries. Just like non-verbal acts, which have various meanings, emoticons and emojis have no standard definitions. They can be used literally or ironically and can be interpreted by the sender and recipient in very different ways. I'm certain we'll continue to see more emoticon and emoji cases as this fascinating area of communication develops and changes.

I tell students every year that a comma can mean the difference between life and death, as was the case for Sir Roger Casement, who was hanged by a comma. The existence or lack of a comma can be the difference in millions of dollars or none. And in the case of Avondale Lockhart, a comma may mean many extra months in prison.

Last week, the Supreme Court heard Lockhart's case, which centers on interpretation of 18 U.S.C. 2252(b)(2).  That statute provides for a mandatory minimum sentence of 10 years for someone convicted of violating federal child pornography laws who has also previously been convicted of a state charge "relating to aggravated sexual abuse, sexual abuse, or abusive sexual conduct involving a minor or ward."

In 2010 Lockhart pleaded guilty to buying child pornography. His sentencing guidelines were increased to the mandatory minimum of 10 years because Lockhart had previously been convicted of attempted rape of his then-girlfriend (who was not a minor). The government took the position that the qualifying language "involving a minor or ward" applies only to the third class of crimes, meaning that even though Lockhart had not previously been convicted of a sexual crime involving a minor, he was subject to the trumped-up sentence for his prior attempted rape conviction. Lockhart disagreed, arguing that the qualifying language applies to all three classes of crimes, and because his prior conviction did not involve a minor, he should not have been subject to the mandatory minimum sentence.

During last week's oral argument, Justice Alito gave Congress a D grade for its drafting of 2252(b)(2), and Justice Scalia told attorneys for the parties that he had "no assurance what the right answer is." As The Economist notes, Congress could have modified the language and punctuation of the statute in several different ways to clarify its intent. Because it didn't, another canon of statutory interpretation--the rule of lenity--likely will save Lockhart from the longer term.
Posted by Megan E. Boyd at 5:32 PM No comments:

Being a Lawyer is Easy...

It's that time of both the semester (for students) and the year (for lawyers) when everyone is tired. We've all been working hard for a while now, and the holidays are still a few weeks away.

The good news is that for many lawyers, the crazy busyness of law practice starts to slow down some in late November and early December. The bad news is that the hecticness starts all over again in January.

A friend recently showed me this t-shirt which, I think, accurately sums up the practice of law some days. Not every day, thankfully. But some. 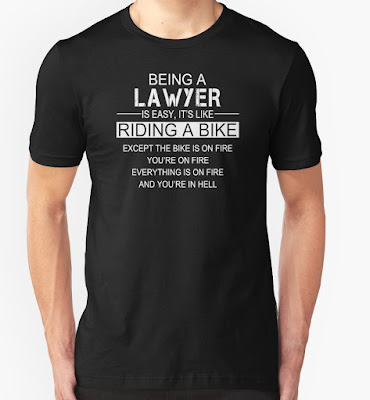 For those interested, you can purchase this funny shirt here.

Happy Friday!
Posted by Megan E. Boyd at 4:43 AM No comments:

Last week I discussed Timothy Hurst's brief in a death penalty case pending before the Supreme Court, Hurst v. Florida. This week, I'm looking at Florida's brief, in which it argues that its laws relating to death sentences are constitutional.

Like Hurst, Florida uses its brief to point out helpful facts, some of which aren't important to the issues before the Court. For example, Florida provides great detail about the heinousness of Hurst's crime, detailing the "sixty slash and stab wounds," some of which were so deep they "cut through the tissue into the underlying bone."

Additionally, Florida notes several times in the brief that not just one jury or one judge, but two juries and two judges sentenced Hurst to death, leaving the impression that this is not a close case but one in which the death penalty was warranted.

Flipping Hurst's Argument on its Head

Unlike Hurst, who suggests that the Florida sentencing scheme in death penalty cases provides fewer protections than those of other states, Florida argues that its sentencing laws actually provide more not fewer protections than those of other states. Florida outlines its five-step process in death penalty cases, noting that a jury may only recommend death if it finds "at least one aggravating circumstance beyond a reasonable doubt" and that even after a jury recommendation of death, the trial judge conducts an "independent" hearing, and all death sentences are automatically reviewed by the Florida Supreme Court.

As you may recall, Hurst spends a substantial portion of his brief arguing that Florida could not even prove a majority of jurors agreed on the same aggravating circumstance in recommending a death sentence. In Florida's brief, however, we learn two important facts that Hurst does not mention: (1) Hurst never contested one of the aggravating factors--that the murder occurred during a robbery--during the trial in chief, and (2) at the sentencing hearing, Hurst acknowledged that the State had proven both aggravators but argued that the mitigating factors outweighed the aggravating factors.

Finally, in his brief, Hurst argues that his case is controlled by the Supreme Court's 2002 decision in Ring v. Arizona and that, under Ring, Hurst was entitled to have a jury, not a judge, decide his sentence. As Florida points out, however, Florida has long used the same death sentencing scheme, the Court has reviewed the scheme at least four times before, and, each time, the Court has upheld the constitutionality of Florida's death sentencing laws. Ring did not overrule those prior cases, Florida argues, and Ring's requirements relate to death penalty eligibility (which is not at issue in Hurst) and not to death penalty sentencing (as Hurst claims).

Downplaying the "What Ifs"

In it's brief, Florida does a good job of allaying concerns Hurst raises in his brief. For example, Hurst raises the possibility that a single judge could override a life sentence recommendation from a 12-person jury. Florida notes that its precedent allows such an override in only the "most extraordinary circumstances," and no judge has overridden a life recommendation since 1999.

Hurst also argues that during the sentencing hearing before only the trial judge (known as a Spencer hearing), the court could consider evidence never presented to or heard by the jury. That seems disconcerting to the average reader, but we learn that in Hurst's case, neither Hurst nor the State submitted additional evidence. With just a few keystrokes, Florida dismisses one of Hurst's key concerns.
Posted by Megan E. Boyd at 2:05 PM No comments: