Acts on the books here in the U.S. have some entertaining names:

But a new act sponsored by New York Congressperson Eliot Engel might be, as MSNBC's Steve Benen says, "the best-named legislation in the history of the U.S. Congress":

Engel is apparently a big fan of Saturday Night Live and Seth Meyers, who inspired the act's name. Only two U.S. states regulate the purchase of flamethrowers, but Engel hopes to change that by introducing this legislation, which would put some purchasing restrictions on these weapons. The Act is currently in committee.

Benen's article on the Flamethrowers? Really? Act is here.

Happy Friday!
Posted by Megan E. Boyd at 5:18 AM No comments:

Last fall I discussed the briefs in an important death penalty case before the Supreme Court, Hurst v. Florida. Earlier this month, the Court struck down Florida’s death penalty scheme as unconstitutional. Justice Sotomayor wrote the majority opinion, which contains some good examples of her strong writing style.

Many lawyers and judges include too many irrelevant details and not enough important ones. As Justice Sotomayor demonstrates, short, straightforward sentences with only the most important details help the reader focus on what’s important. Consider this passage of the factual background:

On May 2, 1998, Cynthia Harrison’s body was discovered in the freezer of the restaurant where she worked—bound, gagged, and stabbed over 60 times. The restaurant safe was unlocked and open, missing hundreds of dollars. The State of Florida charged Harrison’s co-worker, Timothy Lee Hurst, with her murder.

During Hurst’s 4–day trial, the State offered substantial forensic evidence linking Hurst to the murder. Witnesses also testified that Hurst announced in advance that he planned to rob the restaurant; that Hurst and Harrison were the only people scheduled to work when Harrison was killed; and that Hurst disposed of blood-stained evidence and used stolen money to purchase shoes and rings.

Hurst responded with an alibi defense. He claimed he never made it to work because his car broke down. Hurst told police that he called the restaurant to let Harrison know he would be late. He said she sounded scared and he could hear another person—presumably the real murderer—whispering in the background.

No discussion of who found Harrison. No great detail about the investigation or what lead authorities to Hurst. No recitation of the specifics of that “substantial forensic evidence.” No names.

Why? Because these details aren’t important to the legal question at issue, don’t support the majority’s decision in any way, and would be superfluous. Justice Sotomayor keeps the reader focused on only the most salient facts.

In both Point Made and Point Taken, Ross Guberman recommends removing bulky transition phrases in favor of more streamlined ones. Justice Sotomayor does that expertly in her Hurst opinion:

-Even if Ring normally requires a jury to hear all facts necessary to sentence a defendant to death, Florida argues, Ring does not require jury findings on facts defendants have admitted.

-At most, [Hurst’s] counsel simply refrained from challenging the aggravating circumstances in parts of his appellate briefs.

-And in the Apprendi context, we have found that stare decisis does not compel adherence to a decision whose underpinnings have been eroded by subsequent developments of constitutional law.

I love alliteration, and Justice Sotomayor gives us a good example of double alliteration when talking about Florida’s efforts to defend its death sentencing scheme:

-Florida launches its second salvo at Hurst himself.

-Without contesting Ring’s holding, Florida offers a bevy of arguments for why Hurst’s sentence is constitutional. None holds water.

-Time and subsequent cases have washed away the logic of Spaziano and Hildwin.
Posted by Megan E. Boyd at 8:16 AM No comments:

A Review of Lawyers, Liars, and the Art of Storytelling 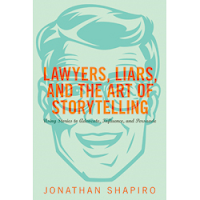 Lawyers, Liars, and the Art of Storytelling by Jonathan Shapiro is probably best characterized as a “why-to” rather than a “how-to” tell persuasive stories in a legal setting. To be sure, Shapiro offers numerous suggestions to improve both written and oral advocacy, but the book is mostly an irreverent mix of stories—stories about real lawyers and real cases; stories about TV lawyers; stories about Hollywood types; and stories about non-legal characters who are, themselves, larger than life. Shapiro adeptly shows readers how to craft a story and uses the stories he crafts to show why stories are important:

If the book sometimes reads like an excuse to tell stories rather than as a manual on how to tell them, then I have done my job. Stories are meant to be instructive and entertaining. Stories that are instructive but not entertaining are called lectures.

Shapiro makes his criticism of lawyers clear from the beginning: many lawyers fail to recognize the importance of storytelling, fail to learn their clients’ stories, and fail to tell those stories persuasively. Why is legal storytelling so important? According to Shapiro,

What lawyers actually do—all of them—is gather information and then share it with others in the most effective way possible. They do this to persuade others to do or not to do something or to make a certain decision….Storytelling—what it is, why it matters, how to do it—is not, therefore, a metaphor for legal advocacy. It is legal advocacy itself.

Shapiro’s chapters on Aristotle’s rhetorical triangle, logos, ethos, and pathos, are particularly important to those of us interested in legal writing. Shapiro argues—rightly, I think—that while each leg of the triangle is necessary to craft a story that can withstand scrutiny, no two triangles should be alike:

Every triangle has three sides. But each triangle has its own unique shape and appearance...It’s is the lawyer’s job to tell the right story, to build the appropriate triangle for his or her client, to make subjective judgments based on the variables as to whether to spend more or less time on establishing ethos, displaying logos, or eliciting pathos.

What follows is a series of stories designed to both show the power of these rhetorical techniques and to teach lawyers how to construct their triangles for maximum effectiveness. Sounds as fun as a dentist appointment, right? Wrong. The lure of Lawyers is Shapiro’s ability to entertain and instruct simultaneously. You won’t even realize how much you’ve learned until you find yourself starting to implement Shapiro’s storytelling methods in your own work.

Lawyers is a delight throughout, chock full of hilarious quips, anecdotes, tips, and pointers. Some of my favorites include:

·         Building credibility (“In a robe, [Ruth Bader] Ginsburg was as commanding as the biblical Ruth. Out of her robe, she was my mother-in-law.”);

·         Being or having a good editor (“If I could have a superpower, it would not be invisibility or the ability to fly. It would be the power to edit.); and

·         Using technology to enhance storytelling (“Technology requires that all storytellers, including lawyers, rethink how to communicate with the audience.”).

Lawyers is—as reviewer Paul Reiser promises—informative, insightful, and funny. The 270-page book is a quick read. But its irreverence shouldn’t be confused with lack of substance. Lawyers has much to offer both to trial lawyers and those whose written work is their primary means of advocacy. No need to bring a highlighter or take notes, though. Thanks to Shapiro’s own ability to tell stories, you won’t need either to learn (and remember) lots from Lawyers!
Posted by Megan E. Boyd at 5:16 AM No comments:

Speaking to Win & Singular "They"

I'm attending Steven Stark's "Speaking to Win" CLE at the State Bar of Georgia today. I'm excited about this CLE and will report details later!

This NPR article on the topic is a good one, as is the American Dialect Society's article on its choice of the singular "they" as the 2015 Word of the Year.

This judicial "poem" from Judge Cain of the Franklin County Ohio Court of Common Pleas has been making the rounds. The poem came about after an inmate who was serving time for a relatively minor crime sued guards at the Correctional Reception Center. The inmate told guards that the showers were making him sick, but the guards refused to let the inmate use the bathroom, causing him to soil himself.

Judge Cain found the suit frivolous and dismissed it in a rhyming opinion that has struck some as unnecessary ridicule:


Cold showers caused his bowels to malfunction
Or so the plaintiff claims
A strict uncaring prison guard
Is whom the plaintiff blames.
While in line for recreation
And little time for hesitation
His anal sphincter just exploded
The plaintiff’s britches quickly loaded.
It made the inmates laugh and play
To see the plaintiff’s pants this way
The foul, unsightly, putrid mess
Caused the plaintiff major stress.
Claiming loss and shame to boot
The plaintiff filed the present suit
But the law provideth no relief
From such unmitigated grief.
Neither runs nor constipation
Can justify this litigation
Whether bowels constrict or flex
De minimus non curat lex. [The law takes no account of trifles.]

You can read the story here, including details about less-than-ideal conditions at Ohio's prisons.

I'm all for fun in law. But is this the right case to "have some fun" with? Does the poem strike you as appropriate under the circumstances?
Posted by Megan E. Boyd at 4:30 AM No comments: