When in Doubt, Call for Backup

Last night I was reviewing case law to decide which arguments I want to make in support of a motion I'll be filing this week.  I was getting tired and frustrated when my little doxie Magnus decided he'd try to give me some assistance (notice the highlighted Westlaw pages he's lying on). 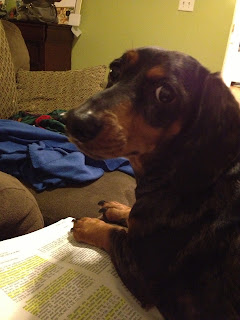 Unfortunately, Magnus wasn't much help with my legal argument, but he did cheer me up.  Sometimes we get so caught up in what we're trying to accomplish, we forget we're not in this alone.  Remember that professors, friends, colleagues, and others are available to proofread, critique, and serve as sounding boards!
Posted by Megan E. Boyd at 1:08 PM No comments:

Allude/elude
To allude to something (or make an allusion, below) is to mention it indirectly.  Elude means to escape from something.  Evade is also similar to elude except that evade means to escape or avoid something by the use of strategy or deceit.
The plaintiff alluded to her pre-existing condition, but never testified about it directly.
The defendant attempted to elude the investigator’s question by changing the subject.

Allusion/Illusion
An allusion is an implied or indirect reference.  An illusion is a misleading image or impression.
Counsel did not directly address, but made an allusion to, the policy arguments supporting her client’s position.
The court found the plaintiff’s recollection of the events to be an illusion.
Compliment/complement
A compliment is a flattering remark.  A complement is something that completes or makes another thing perfect.
The court complimented the parties on their well-written briefs.
The defendant’s oral argument complemented his brief well.

Discreet/discrete
Discreet means acting prudently, with good judgment, or in an unobtrusive way.  Discrete means distinct.
The undercover officer discreetly approached the defendant so as not to raise suspicion.
Maritime issues are governed by a discrete body of law.
Farther/Further
Farther refers to physical distance or proximity.  Further means figurative distance.  If you can’t decide which to use, stick with further.
The defendant lived farther from the accident scene than did the plaintiff.
The argument the defendant intentionally spoliated evidence could not be further from the truth.

Over/more than
The term “over” refers to physical proximity while the term “more than” refers to amounts.
The courthouse is over 10 miles from my office.
It costs more than $100 to file a civil complaint.

Precede/Proceed
Precede means to come before.  Proceed means to go forward or continue doing something.
The arguments on the motions preceded the jury’s entry into the courtroom.
After the objection, the expert proceeded with her testimony.

Principal/principle
A principal is the head of an organization or an amount of money.  A principle is a basic tenet or law.
The defendant was ordered to pay $15,000 principal plus post-judgment interest.
The court’s decision was guided by the principle of stare decisis.

Another Lawyer in Trouble for Disrespectful Language

I've talked before about the importance of being respectful to your adversary and the court and avoiding charged language.  This lawyer apparently didn't get that message.

A Memphis attorney was recently given a 60-day suspension for comments made during a 2008 medical malpractice trial.  The attorney apparently called one of the trial judge's rulings "crazy,"  accused opposing counsel of lying to the judge, and stated the judge might "set a world record for error" with her rulings.  Counsel's statements caused the judge to declare a mistrial, and the case settled shortly thereafter.

The three-member disciplinary panel that handed down the suspension found the attorney's comments "contentious, combative, and protracted."  Specifically, the panel stated:

We do not believe that such conduct can be justified no matter how worthy or vulnerable the attorney's client may be, or how poorly the judge may be performing or how difficult or unethical the adversary counsel may be ... Simply abusing or insulting the court to get rulings in your favor cannot ever be endorsed or justified by our rules and our system of professional conduct.

The attorney has indicated he intends to appeal.  The 60-day suspension won't take effect until all his appeals are exhausted.

I don't have a copy of the panel's opinion, but the story, from the Commercial Appeal, can be found here:

Another Lesson on Proofreading

Since this is bowl week, I thought a football-themed post was in order.  This newspaper teaser line in the Weirton Daily Times is a reminder of the importance of proofreading.  Spell-check didn't catch this unfortunate error.

http://now.msn.com/wvu-loses-bowel-in-newspaper-typo
Posted by Megan E. Boyd at 4:47 PM No comments: