I’ve written hundreds of blog posts, many on general legal writing tips and pedantic issues that interest hard-core legal writing fans. But what I most like now is “reviewing” briefs filed in high-profile cases.

During the October 2018 term, the Supreme Court will hear oral arguments in New Prime, Inc. v. Oliveira, an interesting case about statutory interpretation. At issue is the Federal Arbitration Act, which does not apply to “contracts of employment of seamen, railroad employees, or any other class of workers engaged in foreign or interstate commerce.”

Prime is a trucking company that first retained Oliveira’s services under an “independent contractor operating agreement” then, after Oliveira left the company, Prime re-hired him as a “company driver.” Oliveira later sued Prime for failing to pay him minimum wage, but Prime claimed that the dispute is subject to arbitration under the FAA. Oliveira disagreed, arguing that he was a worker engaged in interstate commerce who had a “contract of employment” exempt from the FAA.

The district court denied Prime’s motion to compel arbitration, holding that whether Oliveira was working for Prime under a “contract of employment” depended on whether he was an employee or independent contractor and that discovery was required to answer that question. The First Circuit found that no discovery was necessary because, after undertaking an extensive examination of the text and history of the transportation exemption to the FAA, it found that “contracts of employment” means agreements to perform work, including agreements between a company and independent contractors. Thus, the First Circuit held that Oliveira’s agreement was a “contract of employment” exempt from mandatory arbitration under the FAA.*

Oliveira’s counsel of record is Jennifer Bennett of Public Justice. His Respondent’s Brief is a solid piece of advocacy and offers some great takeaways for those interested in statutory construction or legal writing. 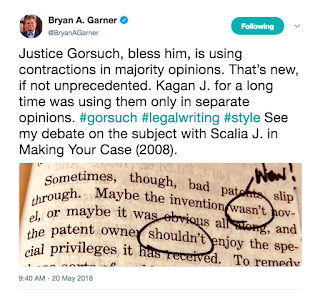 Oliveira’s brief contains a few well-placed contractions that add interest and pizazz to the writing:

Chief Justice John Roberts is one of the best, if not the best writer to ever serve on the Court. So who can blame Oiveira’s counsel for using some Robertsesque phrases and short, punchy sentences? 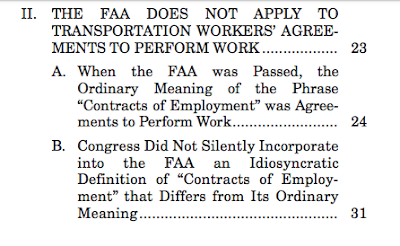 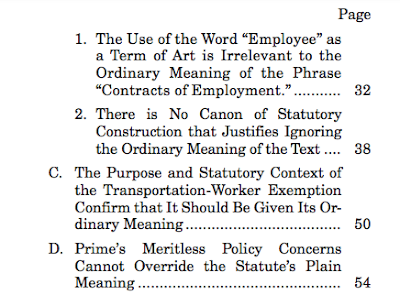 To support the arguments regarding the plain meaning of “contracts of employment,” Oliveira's counsel relies on Supreme Court precedent, non-binding precedent, dictionary definitions contemporary with the enactment of the FAA, other federal and state statutes that used the term “contracts of employment” to include agreements with independent contractors, and additional secondary sources including agency documents and treatises.

Oliveira’s counsel then shoots down Prime’s argument that “employee” is a term of art and “contracts of employment” is equivalent to “contracts of employees” by explaining the multiple meanings of the term “employee” at the time the FAA was passed and outlining the etymology of the word “employ.”  Further, Oliveira’s counsel attacks Prime’s reliance on the statutory construction canon of ejusdem generis and the canon against surplusage and explains why these canons cannot be used to change the plain language of the FAA. Oliveira’s counsel also outlines the purpose of the FAA’s transportation workers’ exemption to show that Prime’s proposed interpretation of “contracts of employment” would frustrate Congressional intent.

Finally, Oliveira’s counsel dismantles Prime’s argument that the First Circuit’s reading of the statute creates bad policy, instead showing that Prime’s reading of the FAA creates problems that are avoided by applying the plain meaning of the phrase “contracts of employment.”

Oliveira’s brief is good, but a few details stuck out to me (in a negative way) as I was reading.

Oliveira’s counsel writes: “This obvious truism is no different for the FAA.” A truism is something obviously true, so “obvious truism” is a tautology.

Oliveira’s counsel also relies heavily on “artificial” emphasis in the form of italics in certain places in the brief. I don’t mind a few italic or underlined words here and there for emphasis, but overemphasizing words and phrases has the opposite effect. Take the paragraph below, for example. I don’t think these italics (which I’ve also bolded for easier reading) add anything—the language would have been just as effective without them:

Prime does not cite a single source contemporary with the FAA that says otherwise. Instead of looking to the ordinary meaning of the statutory text when the FAA was enacted in 1925, Prime relies on a dictionary published in 2014. And rather than the actual phrase Congress used—“contracts of employment”—Prime relies on a different term—the word “employee.” But statutes are interpreted according to their ordinary meaning at the time they were enacted—not a century later. And they are interpreted in accordance with the meaning of the words Congress actually used, not similar-sounding words it didn’t. While the word “employee” in 1925 had multiple common meanings, the phrase “contracts of employment” had only one: agreements to perform work. The employment status of the worker was irrelevant.

These minor critiques aside, Oliveira’s brief is an interesting read and worth your time.

You can find coverage of Oliveira and read the briefs at SCOTUSblog.

*By way of full disclosure, I joined an amicus brief primarily authored by Nantiya Ruan in which the amici, as statutory construction scholars, urge the Court to uphold the First Circuit’s ruling.
Posted by Megan E. Boyd at 5:47 PM No comments: