A Winning Update to a Classic Appellate Text 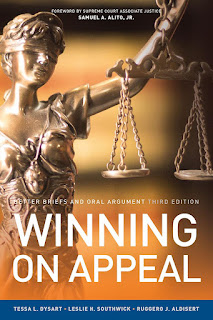 Winning on Appeal is divided into five parts:

The meat of Winning on Appeal starts with Part Two. Chapter Four, Jurisdiction, and Chapter Five, Issue Preservation and Standards of Review, are particularly helpful for those new to appellate advocacy. In these chapters, the authors walk readers step-by-step through appealability considerations and help readers learn to distinguish appealable orders from non-appealable ones (a trap for the inexperienced). The chapter also includes information about computation of time, tolling, and extension under Rule 4(a)(5).

Chapter 5, on issue preservation, is a gem. The authors note:

The necessity of issue preservation is the short answer to the question, when does one start to prepare for an appeal? The textbook response is, the earlier the better. A competent football coach would not dare go into a contest without a game plan. Likewise, no competent trial lawyer will participate in a trial or hearing without a definite theory or strategy supporting the contention or defense. The coach prepares for the entire game, for all four quarters. Most lawyers do not. They prepare only for the first half, the trial itself. If an appeal is necessary, they will wing it.

The authors go on to discuss the three categories of facts—basic, inferred (or circumstantial), and mixed questions of law and fact. The authors then offer an excellent discussion of the standards of review for different types of fact-finding (e.g., by judges, by administrative agencies), for mixed questions of law and fact, and for purely legal questions. This discussion is followed by a review of “discretion” in which the authors invite readers to consider the different degrees of discretion and stress the importance of being able to articulate the relevant degree of discretion to the appellate court.

As you’d expect, part three, on brief writing, is my favorite. The authors of Winning on Appeal first tackle brief writing with tips for selecting and narrowing the issues on appeal. As they note,

“More is not better in appellate advocacy. Judges are interested only in arguable points.”

This discussion also helps readers decide how to organize issues (strongest argument first absent a threshold issue) and how to order issues as the appellee, two important considerations that don’t get enough (or any) attention in some texts.

In the next few chapters, the authors address researching the issues, organizing research, and evaluating and selecting authority. Winning on Appeal includes a handy Citation Evaluation Chart to help advocates maximize the persuasive value of the authority they choose. Interestingly, the authors caution against a technique that many lawyers love—string citing—calling it “generally irritating and useless.”

The authors then go on to cover distinct parts of briefs, such as issue statements and point headings, and include entire chapters devoted to the often-overlooked statement of the case and summary of the argument sections.

The chapter on writing, editing, and citation contains much of the standard advice, such as avoid lawyerisms, be concise (with a hat tip to the excellent Plain English for Lawyers), be clear, be civil, and edit “vigorously.” But the authors do wade into the contentious footnote-versus-in-text-citation debate: They prefer in-text citation:

“[Footnotes] do[ ] not serve the intended audience: judges and their law clerks.”

One of my favorite chapters in Winning on Appeal is Chapter 11, entitled The Brief: The Required Logical Form for Each Issue. After lawyers-to-be finish first-year legal writing courses, many don’t think much about the logic behind written legal arguments. This chapter discusses the differences between deductive and inductive reasoning, with easy-to-follow examples of each, and includes helpful tips for recognizing and avoiding logical and linguistic fallacies. This chapter isn’t something you see in a typical text on appellate advocacy but is a wonderful addition to Winning on Appeal.

The text concludes with chapters on preparing for and delivering oral argument. These chapters contain a multitude of information about topics even seasoned appellate practitioners may not have thought much about, including the use of visual aids, strategies for arguing before a cold bench, and the best ways to answer questions from the bench (including tips for cases involving divided representation).

While Winning on Appeal is targeted at appellate practitioners, this text should be on the bookshelf of anyone who thinks and writes about law.

You can find Winning on Appeal here.
Posted by Megan E. Boyd at 7:14 AM No comments:

Every Supreme Court season I “review” briefs filed in some of the term’s most high profile cases. Today, I’m looking at the Petitioners’ Brief in Masterpiece Cakeshop, a dispute over provisions of Colorado’s Anti-Discrimination Act. Masterpiece Cakeshop and its owner, Jack Phillips, were found to have violated Colorado’s Anti-Discrimination Act after Phillips refused to make a wedding cake for a same-sex couple, Charlie Craig and David Mullins. After legal wrangling before Colorado agencies, the Colorado Court of Appeals rejected Phillips’s free-speech and free-exercise arguments and upheld the decision of the Colorado Civil Rights Division’s ALJ.

The authors use the introduction to explain that Phillips is an artist, and “cakes a[re] his canvas: He “blend[s] his skill as a pastry chef, sculptor, and painter” to “meticulously craft[ ] each wedding cake through hours of sketching, sculpting, and hand-painting.” Because, the authors claim, “[t]he cake, which serves as the iconic centerpiece of the marriage celebration, announces through Phillips’s voice that a marriage has occurred and should be celebrated,” Phillips cannot be forced to create cakes that are “[in]consistent with the tenets of his faith.”

The lower tribunals’ holdings, they argue, “threaten[ ] the expressive freedom of all who create art or other speech for a living.” The authors’ introduction quickly and succinctly provides the reader with the salient facts and arguments to follow.

The authors use descriptors to divide the statement of the case:


These descriptors are helpful in pulling together what might otherwise feel like disjointed information. Outlining Phillips’ work and his faith before discussing the event that led to the litigation works well and provides the foundation for the reader to understand why Phillips rejected the request to bake a cake for Craig and Mullins’s wedding and why, the authors believe, doing so was his First Amendment right—that is, because cake-baking is a form of artistic expression.

The tradition of creating special cakes for weddings dates as far back as Roman times. The wedding cake developed not as an integral part of a meal but as a festive or celebratory” component of the newlyweds’ union. In modern Western culture, the wedding cake has become the iconic centerpiece of the celebration . . . . A wedding without it would be a wedding without protocol, a rite without confirmation.”

Wedding cakes are inseparable from the nearly ubiquitous cake-cutting ritual that accompanies them. Guests gather around as the couple cuts the cake together and feeds it to each other—their “first joint action” as newlyweds. It is a celebratory performance, which itself is infused with rich symbolism and meaning, and which has the specially designed cake at its center.

The authors also include a photograph of some of Phillips’ cakes, showing that “[e]ach one is a custom-made, elaborately designed, intricately constructed, and typically tiered masterpiece.”

My only gripe with the Statement of the Case is its duplicativeness. Some parts of the statement mirror information already provided in the introduction. For example:

Intro: With this in mind, Phillips created a Masterpiece logo depicting an artist’s paint palate with a paintbrush and whisk.

Statement: Even Masterpiece’s logo, which features an artist’s paint palate with a paintbrush and whisk, reflects Phillips’s artistic approach.

Intro: By effectively forcing him to stop designing wedding cakes, the Commission stripped Phillips of roughly 40% of his family income . . . .

Statement: Before the Commission forced him to stop, custom wedding cakes accounted for approximately 40% of Phillips’s business.

Statement: He and his wife own their own family business, Masterpiece Cakeshop, where for the last twenty-four years Phillips has made custom cakes . . . .

Sometimes, facts that don’t initially appear material can sway readers. The authors include some of these facts that are helpful to their client’s position. For example, consider this information, falling in the “no harm, no foul” category: even though Phillips’ refused to design a cake for them, Craig and Mullins eventually got their cake and ate it too.

Another local cake artist offered to design a free wedding cake for Craig and Mullins, an offer they accepted. Craig and Mullins then married in Massachusetts (because same-sex marriage was not licensed in Colorado at the time), and they had a multi-tiered, rainbow-layered wedding cake at their reception in Colorado. Following wedding customs, they cut the cake together and fed it to each other in celebration of their union.

The authors also note, many times throughout the brief, that Phillips does not discriminate based on who people are but on the intended use for the items he bakes, thus attempting to gain credibility for their client and his position:


They reinforce their narrative that Phillips is a “good guy” who is simply following the tenets of his faith rather than someone who refuses to bake cakes for same-sex persons because he fundamentally dislikes them.

I encourage brief writers to follow the newspaper maxim: tell ‘em what you’re going to tell ‘em, tell ‘em, then tell ‘em what you told ‘em. The authors include an excellent roadmap in Section I of the argument, outlining the four-part free-speech analysis:

Phillips’s free-speech analysis proceeds in four parts. First, the Free Speech Clause applies because Phillips’s custom wedding cakes are his artistic expression. Second, this Court’s compelled-speech doctrine forbids the Commission from ordering Phillips to express or celebrate what he cannot in good conscience support. Third, no less than strict scrutiny applies because not only has the Commission sought to compel Phillips’s artistic expression, it has discriminated based on both content and viewpoint. Finally, as Part III demonstrates, the Commission cannot satisfy its heavy burden under strict scrutiny.

You can find the Masterpiece Cakeshop brief here, courtesy of SCOTUSblog. Oral argument is scheduled for December 5, 2017.