A few months ago, Morton, Pennsylvania attorney Matthew B. Weisberg of Weisberg Law got some publicity after the Supreme Court granted his client's cert petition to consider whether the discovery rule applies to the Fair Debt Collection Practices Act. 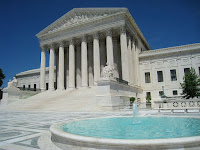 The hubbub surrounding the petition is its length—the substantive portion is only eight pages long, including the signature block. So how did Weisberg convince the Court to hear the case in only eight pages? Let's take a look.

Weisberg's Question Presented is succinct and highlights a circuit split on applicability of the discovery rule to the FDCPA:

Whether the "discovery rule" applies to toll the one (1) year statute of limitations under the Fair Debt Collection Practices Act, 15 U.S.C. §§ 1692, et seq., as the Fourth and Ninth Circuits have held but the Third Circuit (sua sponte en banc) has held contrarily.

Weisberg's recitation of the underlying events is 3/4 of a page. It totals seven sentences, broken into six paragraphs, and includes only the most basic information.

Petitioner (Appellant-Plaintiff below), Kevin Rotkiske, accumulated credit card debt between 2003 and 2005. The debt was referred by his bank to Respondent (Appellee-Defendant below), Klemm & Associates, et al., (collectively, "Klemm") for collection.

Klemm sued for payment in March 2008 and attempted service at an address where Rotkiske no longer lived.

Klemm withdrew its suit when it was unable to locate Rotkiske.

In January 2009, Klemm re-filed its suit and attempted service at the same address.

Rotkiske discovered the judgment when he applied for a mortgage in September 2014.

The procedural history, including both the district court and appellate court proceedings, occupies another page or so and is also minimal.

Weisberg puts his money where his mouth is. This strategy works well because he argues later that the simple facts make the case a good vehicle for deciding the legal question. What better way to show the Court that the case is indeed factually simple than writing a short statement of facts?

Reasons for Granting The Writ

In the next four pages, Weisberg argues that the Court should grant the writ for four reasons: (1) the circuits are split on the issue, (2) the Third Circuit improperly interpreted Supreme Court precedent on a similar issue; (3) the issue has never been decided by the Court; and (4) the simple facts present the "perfect vehicle" for deciding the issue. 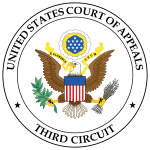 Like the factual background, Weisberg's legal arguments are also to the point. For example, in arguing that the Third Circuit improperly applied Supreme Court precedent on a similar question, Weisberg writes:

On the contrary to the FCRA, the FDCPA does not contain an embedded statute of limitations. [Thus,] the FCRA's statutory limitations' text should have required [a] contrary holding [as to the FDCPA] . . . ."

I'm impressed by the tightness of the writ, and Weisberg obviously worked hard to avoid rambling. I would change some phrasing in a few spots and clean it up a little, but overall, it's a good example of less-is-more.

NOTE: Rotkiske's petitioner's brief was filed on May 13, 2019 by Scott E. Gant of Boies Schiller, who is now listed as counsel of record. The Court has yet to schedule oral argument.

Justice Kagan recently made waves for her impassioned dissent in the Court’s most recent death penalty decision. In Dunn v. Ray, the 5-4 majority vacated a stay of execution and allowed Alabama to execute Domineque Ray without the presence of his requested spiritual advisor, an imam. The majority opinion reads, in full:

Holman Correctional Facility, the Alabama prison where Domineque Ray will be executed tonight, regularly allows a Christian chaplain to be present in the execution chamber. But Ray is Muslim. And the prison refused his request to have an imam attend him in the last moments of his life.

“Time” words cleverly and convincingly draw attention to the majority’s flawed opinion that Ray’s request to have an imam present was untimely:

The Alabama prison where Domineque Ray will be executed tonight . . . refused his request . . . . Yesterday, the Eleventh Circuit . . . stayed Ray’s execution . . . . Today, this Court reverses that decision . . . .

Justice Kagan also employs a series of rhetorical questions contrasted with short, clipped “answers” from the State to support her position that the State is attempting to push the execution through quickly:

Why couldn’t Ray’s imam receive whatever training in execution protocol the Christian chaplain received? The State has no answer. Why wouldn’t it be sufficient for the imam to pledge, under penalty of contempt, that he will not interfere with the State’s ability to perform the execution? The State doesn’t say.

Short transitions, such as but, and, and so (rather than nonetheless, additionally, therefore, etc.), advance Justice Kagan's story about why the majority’s opinion is factually and legally flawed and do so in a way that makes the argument even more compelling. And Justice Kagan’s final sentences (minus her respectful dissent) are commanding:

Here, Ray has put forward a powerful claim that his religious rights will be violated at the moment the State puts him to death. The Eleventh Circuit wanted to hear that claim in full. Instead, this Court short-circuits that ordinary process—and itself rejects the claim with little briefing and no argument—just so the State can meet its preferred execution date.

The “short-circuit” term is masterful—per Justice Kagan, the Court is literally shorting the Circuit an opportunity to hear a claim that it wanted to consider. And referring to the State’s “preferred” execution date underscores what Kagan sees as the flippancy with which the majority has made a decision of great constitutional magnitude.

Compare Justice Kagan’s cool, clean sentences with the type we’re used to reading in many opinions, and you’ll see why her writing is so, so good: 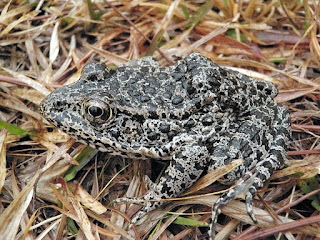 On November 27, 2018, Chief Justice Roberts issued the Court’s unanimous opinion in Weyerhaeuser v. United States Fish and Wildlife Service. Weyerhaeuser involves the Service’s designation of property in Louisiana as a “critical habitat” of the endangered dusky gopher frog. The problem, according to Weyerhaeuser, the owner of part of that property, is that no dusky gopher frogs have been observed on the site since 1965, and the current tree farm on the site has created a closed-canopy that Weyerhaeuser claims is inhospitable to the frog.

This case is particularly interesting to me because I teach and write on animal law. The opinion contains many classic Chief Justice Roberts techniques and is another example of why he is one of the two best writers on the Court.

The Description of the Dusky Gopher Frog

Chief Justice Roberts begins with a lengthy description of the dusky gopher frog:

The amphibian Rana sevosa is popularly known as the “dusky gopher frog”—“dusky” because of its dark coloring and “gopher” because it lives underground. The dusky gopher frog is about three inches long, with a large head, plump body, and short legs. Warts dot its back, and dark spots cover its entire body. It is noted for covering its eyes with its front legs when it feels threatened, peeking out periodically until danger passes. Less endearingly, it also secretes a bitter, milky substance to deter would-be diners.

The Chief is known for including this type of peripheral but interesting information in his writing and has been doing so since his time as an advocate. 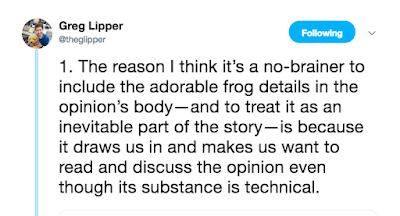 As Greg Lipper (@theglipper) noted, these details add interest and encourage the reader to continue reading this “technical” opinion on statutory interpretation and reviewability of agency action. Chief Justice Roberts used the same technique when he represented Alaska in Alaska v. EPA, another technical but more complicated case involving statutory interpretation and reviewability. 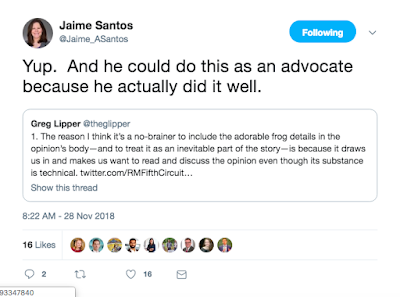 And Jamie Santos (@Jamie_ASantos) is right too—including these types of details can be tricky, and Chief Justice Roberts does it very well. A brief with too many irrelevant details can come off as unfocused or campy, so this technique must be employed with great care.

One issue in the case turns on the meaning of the phrase “critical habitat.” Chief Justice Roberts writes:

According to the ordinary understanding of how adjectives work, “critical habitat” must also be “habitat.” Adjectives modify nouns—they pick out a subset of a category that possesses a certain quality. It follows that “critical habitat” is the subset of “habitat” that is “critical” to the conservation of an endangered species.

I love both this description and the unstuffiness of it. Many would be tempted to write “the way in which adjectives operate in the English language.” Chief Justice Roberts resists that temptation—“how adjectives work” is a wonderfully short description.

I don’t love the formulaic “first, second, third” argument markers, but they are better than nothing.* Jamie Santos noted recently, though, that replacing these markers can take writing to the next level. 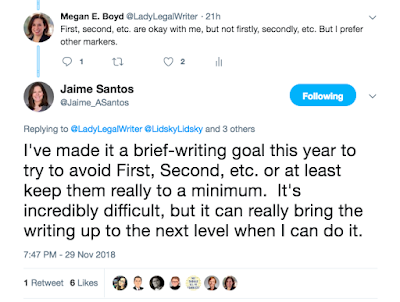 Chief Justice Roberts does this expertly in the Weyerhaeuser opinion.

There is, at the outset, reason to be skeptical of the Service's position. The few cases in which we have applied the § 701(a)(2) exception involved agency decisions that courts have traditionally regarded as unreviewable . . . .

Although the text meanders a bit, we recognized in Bennett v. Spear, 520 U.S. 154 (1997), that the provision describes a unified process for weighing the impact of designating an area as critical habitat. . . .

The use of the word “may” certainly confers discretion on the Secretary. That does not, however, segregate his discretionary decision . . . .

Section 4(b)(2) requires the Secretary to consider economic impact and relative benefits before deciding whether the exclude an area from critical habitat or to proceed with a designation….

There is, at the outset, reason to be skeptical of the Service’s position. First, the few cases . . . .

Third, the use of the “may” certainly confers discretion . . . .

While I don’t love the outcome from an animal law perspective, the opinion is interesting and the reasoning well-explained. There’s still hope for the dusky gopher frog, though—the Court remanded the case and directed CA5 to consider questions it did not answer regarding the definition of “habitat.” And even though the Court found the Service’s decision reviewable, that decision is subject to the permissive abuse of discretion standard.